Whenever I give walking tours in Bronzeville, I like to point out not only the landmarks, which are plentiful in this historic neighborhood, but also the newer local sites that will continue to draw tourists. At the corner of 35th and State there are two six-feet and 4,000 pound obelisks that were installed in November, 2009. The obelisks (Greek for a tall four-sided stone pillar that taper to a pyramidal top) were the created from an idea of the late Senator Margaret Smith and Esther Barnett, a local merchant. The Bronzeville Merchants Association, the State of Illinois and the City of Chicago are responsible for these interesting works of art.

The obelisk south of 35th Street honors the first non-native settler of Chicago, Jean Baptiste Point DuSable. Many people don’t that many African Americans settled in Chicago as it became a city after 1837. A panel honoring Dr. Daniel Hale Williams is also here, telling the story of Provident Hospital in Bronzeville where the first open heart surgery was performed.

Also mentioned are all of the types of businesses that flourished and the “stroll” area where people walked and shopped and interacted. If you visit the landmark Chicago Bee and Douglas Bank Building two blocks south at 36th and State you can see the mural inside of the entrance to what is now the Bee Branch of the Chicago Public Library. The mural depicts the State Street area and the “stroll”.

The other obelisk is located north of 35th Street closer to the campus of IIT (Illinois Institute of Technology. It tells the story of Bronzeville as a city within a city, complete with its own shops and entertainment. This is because of the racially restrictive covenants that prevented blacks from purchasing or renting homes outside of the “Black Belt”. The area was busy with people and commerce, theaters and clubs for entertainment.

Each of the obelisks has hieroglyphics on them. Every time I visit with tour guests someone asks about the hieroglyphic symbols. I always have to say I don’t know what they symbolize, but now I’m on a quest for knowledge. Can you find out what they mean?

What other obelisks do you know and where are they located? 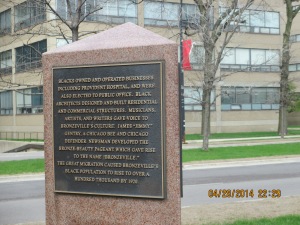 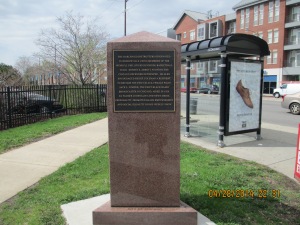 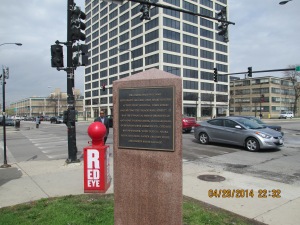